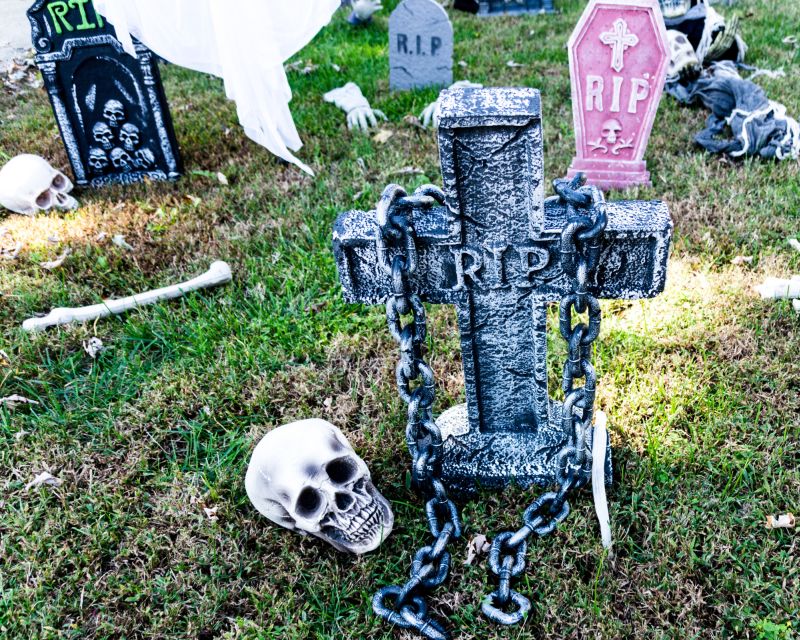 Your own private cemetery as Halloween decoration

Few things provide a more comforting and eerie backdrop for a coherent Halloween party than the picturesque surroundings of an old cemetery.

Now, unfortunately, most public cemeteries are closed at night, not to mention that most cemetery keepers have a rather narrow-minded idea of resting the dead.

Don't they think that a corpse, which has been waiting in its coffin for decades now, would appreciate a good drink and a nice chat?

So there is nothing left but to bring the cemetery to your home. But even that, it should be mentioned from personal experience, is easier said than done. Once you have dragged the first stone cross with an integrated grave slab up to the fourth floor, you quickly tend toward the alternative of a wooden cross cemetery.

But these times are now finally over!

The Pumpkin King shows you how you can make beautiful, decorative tombstones and crosses with the simplest means and a little time and thus transform even the smallest house into a comfortably scary private cemetery. A great idea for a coherent creepy Halloween decoration.

Gravestones come in a wide variety of shapes and sizes. To get inspired for your own creations, a walk on a beautiful old cemetery is worthwhile.

Here are a few examples of typical gravestone shapes. 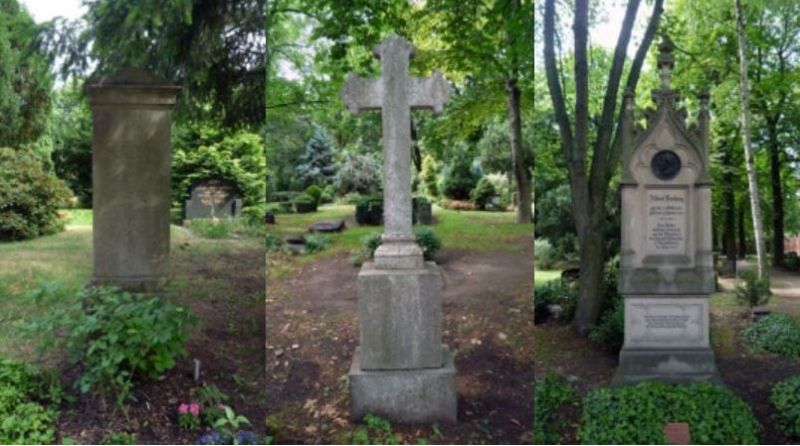 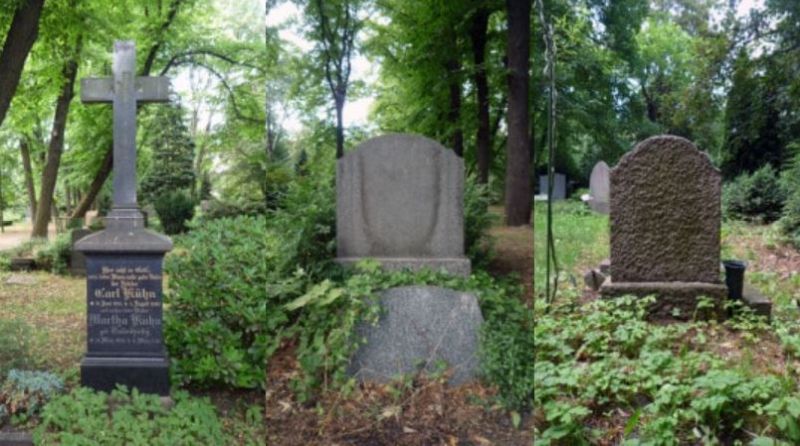 Time required: Depending on the number and shape. However, due to the drying times of paint and glue, you should plan for a longer period. Until the wallpaper glue is properly dry, it may take 24 hours.

Difficulty: easy - demanding (depending on the shape of the tombstone)

Gravestones and crosses come in a wide variety of shapes and sizes.

We present you here representative of four variations. The basic technique for making them is always the same. Once you have tried it, you can build the most diverse crosses and gravestones.

Because only the variety creates the desired creepy and picturesque atmosphere. Otherwise it would look like a military cemetery. 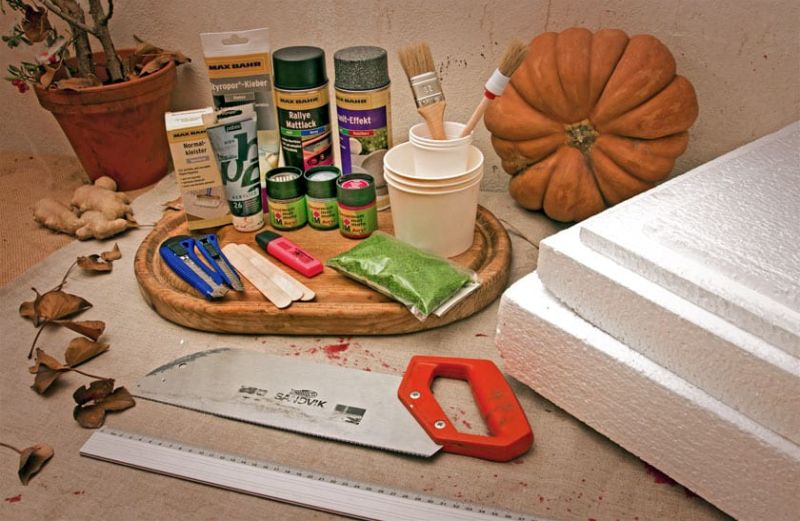 We start with the small tombstone. So to speak, the standard version.

As a starting material, cut out a piece of a suitable size from a thick Styrofoam plate. Use a pencil to visibly mark how the upper curve of the tombstone should run and then cut these curves and the corners with a sharp cutter knife.

So that the stone does not look too uniform and sterile later on, you now carve elongated strips along the side edges.

Small nicks support the venerable and dilapidated impression of our little gravestone, which bravely resists the rigors of time.

But don't overdo it, or it will look like a gravestone with badly healed acne.

Then carve a cross into the front. Alternatively, you can carve a year, the classic R.I.P. (Rest in Peace) or even a name.

But the cross is the easiest and always looks cool. The basic shape of the gravestone is now ready.

For the coloring, mix a watery color mixture of gray (and a little brown if you like) in a cup. Now prime the Styrofoam gravestone with it.

When this is halfway dry, spray the whole thing with granite effect from the spray can to achieve the desired stone effect.

So that the stone does not look too even, you now draw a slight gradient from the bottom to the center with the black spray can, so that the standing surface is darker than the upper area.

So that you don't draw any distinct black lines, spray very carefully and above all from some distance. Once again, it is extremely important to work on a large surface here.

Now it's time for the details.

Use a brush and a thin, black paint solution to create the deep parts of the gravestone, such as the cross, the embrasures and other places that seem appropriate to you.

The paint should be watery - that is, not opaque - but let the brush drip off first and wipe it on the newspaper. Use the remaining color on the brush to create the dark areas.

The contrast should not be too strong and the edges not too accentuated.

The best result is achieved by dabbing rather than stroking with the brush. Do the same again with a light gray. Only that you now emphasize the things that stand out and should be a little brighter, such as the edges.

By now, your tombstone should look pretty good.

Time to give it the final morbid touch and make a huge mess.

Stir a thick mixture of wallpaper paste and get ready: Grass powder from modeling, bird sand, and a mixture of soil and small pieces of beef (as is often used in garden landscaping - you can fork over a cup).

Of course you can also use less or other utensils.

Now generously coat the areas where you want the tombstone to be covered with moss and dirt with wallpaper glue and sprinkle the areas first with the grass powder and then with the other utensils.

It is even easier if you stir everything together in a cup beforehand and distribute it with a brush on the corresponding areas.

Pay attention to variety! Apply it thickly and generously in some places (for example, at the foot and the lower sides), while you only apply a few heavily overgrown places in the upper areas and otherwise only set fine accents. After all, the whole thing should look as natural as possible and not too uniform.

As the icing on the cake, you can now glue a few leaves to the stone.

When you are satisfied, let the whole thing dry out a bit and then go over the whole mess again with a brush and wallpaper glue to fix it. Then after about a day, when everything has dried completely, it should form a solid crust that won't crumble all over your apartment.

The large tombstone is somewhat more elaborate, as it is assembled from several elements.

But actually it's just a pretty simple building block principle.

On the thick plate, draw the base body and the attachment and cut out the pieces with a sharp cutter knife.

Then cut the connecting piece from the medium thick plate.

Make sure that it is much narrower in width than the base body and the attachment.

For test purposes, put the elements together once and see if it looks good or if you might have to cut off another piece.

Also when you cut the roof elements, you have to make sure that the size is determined in such a way that they later protrude over the edge. Either you measure this carefully or you use the attachment as a template by placing it with the upper surface on the thin Styrofoam plate and drawing around it with a sharpie at a distance of approx. 1 cm (because of the mentioned overhang).

Now you have all the basic elements together.

Cut the decorative strips to size.

Before you glue everything together, carve a cross or a grave inscription with a cutter knife.

First, glue the trim strips with polystyrene adhesive. Then glue the three main elements to each other.

For a stable connection, it is recommended to additionally connect the three elements with a pointed piece of wood (in this case a sharpened wooden spatula).

You can seal any unwanted gaps between the elements with styrofoam glue.

Finally, glue the roof elements to the slopes of the attachment. Bevel the edges where the two elements meet with a cutter knife beforehand so that they form a nice, pointed roof edge.

If you feel like it, you can cut an oval plaque from the remaining thin Styrofoam, as it used to be seen on many older graves and on which you could look at the portrait of the deceased. Bevel the edges and attach the plaque in a suitable place.

For the color design, proceed as with the small gravestone. 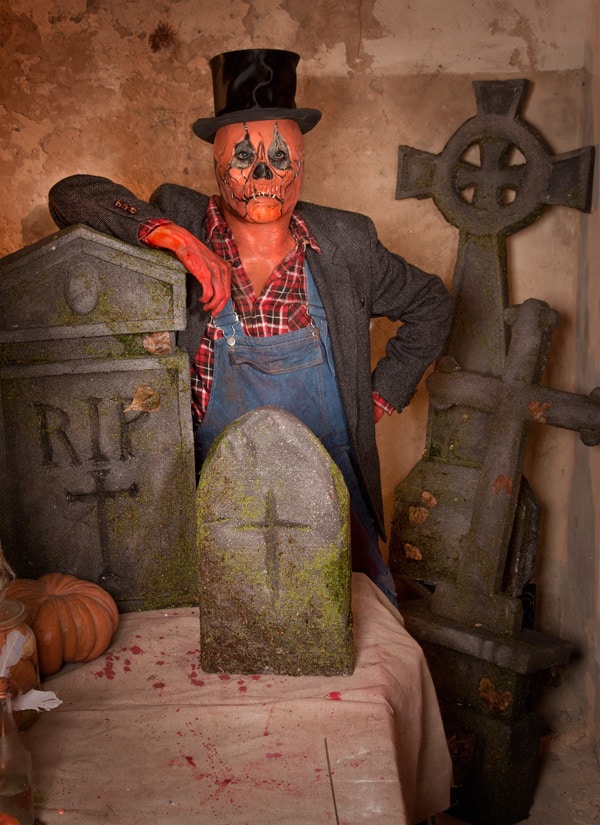 As an inexpensive alternative for your own funeral, however, Styrofoam gravestones are not too serene. (They fly away too quickly.) 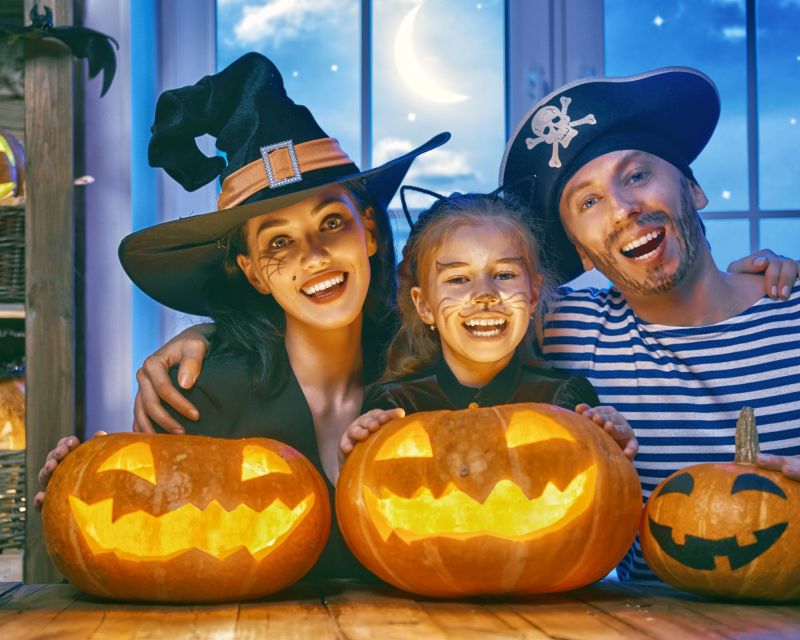